This is insanity. First grade is for teaching writing. When do kindergarteners learn how to write several sentences??

This short of raised expectations is just crazy. Why not just give them algebra??? This is like my kid's kindergarten homework when they were supposed to READ colors y-e-l-l-o-w. When were kindergarteners supposed to enter already knowing how to read?


McNeese, who has taught elementary school for 19 years, says the standards have raised expectations for her students. In the past, for instance, kindergarteners were expected to draw a picture and write a single sentence explaining the picture. Under Common Core, they are expected to write several sentences about a specific topic and draw a picture that reflects what they wrote. Instead of spending between 15 and 30 minutes on writing each day, McNeese’s students now write for more than an hour throughout the day. In math, her students will be expected to count to 100 by the end of this year instead of 20 (the requirement under the old standards).

Use of technology: Kindergarten students may use available technology to compose text.
Kindergarten: Writing Purposes
Kindergartners are introduced to different types of writing in a variety of ways. Teachers read aloud from children’s literature and discuss each author’s purpose with the class. Students also learn the different reasons for writing through simple writing activities. Lessons usually center on a shared writing activity, with the teacher acting as a scribe. As students learn, they progress from drawing pictures and writing individual letters to writing short sentences that tell a story or describe their experiences. Specifically, writing standards stipulate that kindergarten students will:
Use letters and phonetically spelled words to write about experiences, stories, people, objects, or events.
—Write words and brief sentences that are legible.
—Write his/her own first and last name and other important words.
Punctuation
—Use end punctuation, including periods, question marks, and exclamation points.
Capitalization
—Capitalize letters to begin “important words.”
Spelling
—Spell simple words independently by using pre-phonetic knowledge, sounds of the alphabet, and knowledge of letter names.
—Write consonant-vowel-consonant words (“cat”).
Penmanship
—Print uppercase and lowercase letters of the alphabet and recognize the difference between the two.

All of these writing samples are from kindergarten students, some from half day classes, some from full day programs.
Posted by BlArthurHu at 2:49 PM No comments:


Based on a study conducted by the Organization for Economic Cooperation and Development (OECD), 24/7 Wall St. compiled a list of the 10 countries with the highest proportion of college-educated adult residents. Topping the charts is Canada — the only nation in the world where more than half its residents can proudly hang college degrees up on their walls. In 2010, 51% of the population had completed a tertiary education, which takes into account both undergraduate and graduate degrees. Canada commanded the top spot in the last study in 2000, but even still has shown serious improvement. A decade ago, only 40% of the nation’s population had a college degree.
Snagging the number two most-educated spot was Israel, which trailed Canada by 5%. Japan, the U.S., New Zealand and South Korea all ranked with more than 40% of citizens having a higher-education degree. The top 10 most-educated countries are:
1. Canada
2. Israel
3. Japan
4. United States
5. New Zealand
6. South Korea
7. United Kingdom
8. Finland
9. Australia
10. Ireland

In China, an estimated 14% of today’s young people will graduate from a tertiary-type
A first-degree programme, (US=38) Asian Americans over 50%


• Based on current patterns of graduation, it is estimated that an average of 39% of today’s young
adults in OECD countries will complete tertiary-type A (largely theory-based) education over their
lifetimes, from 50% or more in Australia, Denmark, Iceland, Poland and the United Kingdom to
less than 25% in Mexico, Saudi Arabia and Turkey.
• At the same time, it is expected that only one-third of young adults will complete tertiary-type A
education before the age of 30, from a high of more than 40% in Australia, Denmark, Ireland,
Poland and the United Kingdom to only 18% in Mexico


In 2010, graduation rates for tertiary-type B programmes averaged 11% among the 26 OECD countries
with comparable data. These programmes are classified at the same academic level as more theory-based
programmes, but are often shorter in duration (usually two to three years). They are generally not intended to
lead to further university-level degrees, but rather to lead directly to the labour market. In 2010, the graduation
rates for women were 12% compared to 9% for men (Table A3.1).
Based on 2010 patterns of graduation, on average among OECD countries, 39% of young people will graduate
from tertiary-type A first-degree programmes (often called a bachelor’s degree) and 15% from tertiary-type
A second degree programmes (often called a master’s degree). For first-degree programmes, the graduation
rate equals or exceeds 50% in Australia, Iceland, New Zealand, Poland and the Russian Federation but is lower
than 20% in Argentina, Belgium, China, Indonesia, Saudi Arabia and South Africa. The low graduation rates
in Argentina, Belgium and China are counterbalanced by a higher level of first-degree graduation rates from
tertiary-type B programmes. The graduation rate from second-degree programmes equals or exceeds 20%
in Belgium, the Czech Republic, Denmark, Finland, Iceland, Ireland, Poland, the Slovak Republic and the
United Kingdom (Table A3.3). With the implementation of the Bologna process, programmes at this level of
education have developed considerably 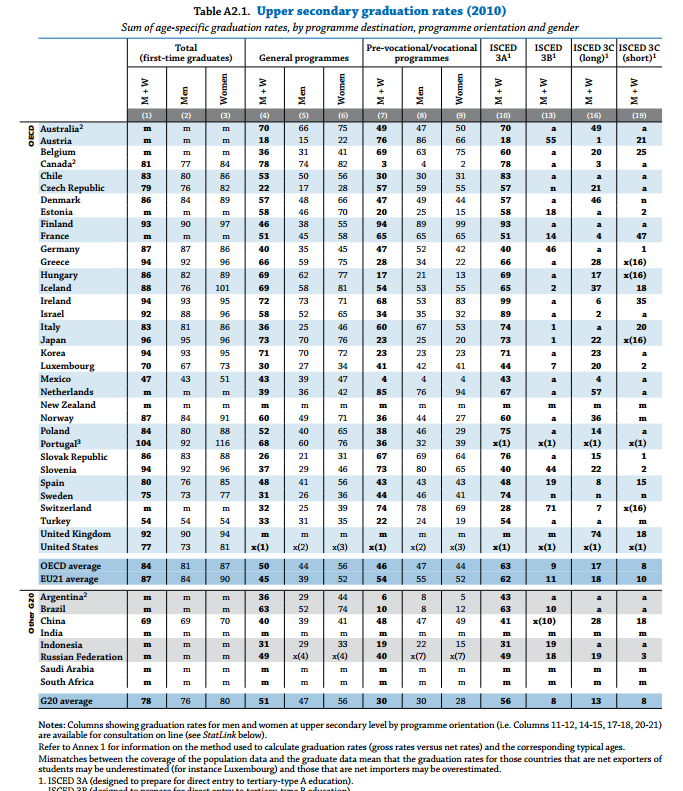 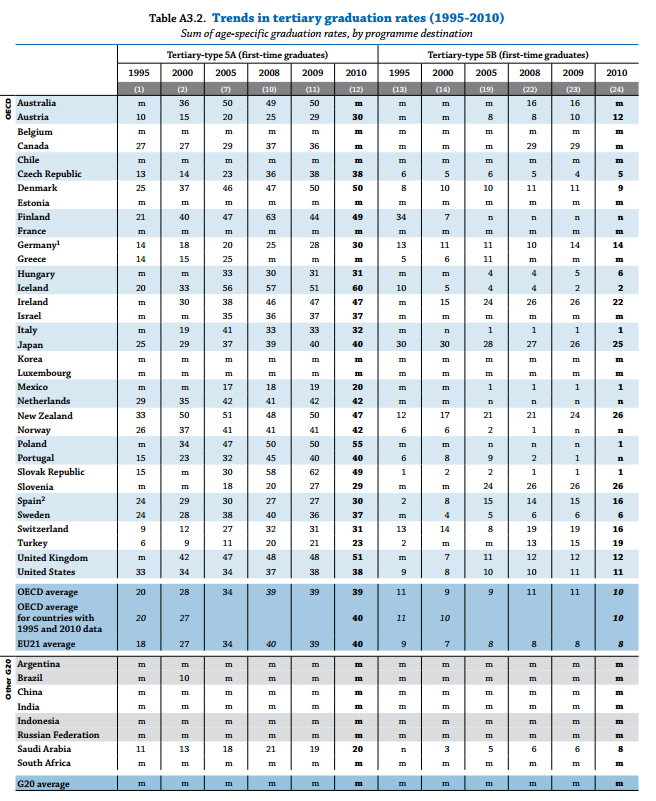 According to a new report from the College Board (.pdf), Russia is the world leader when it comes to graduating its citizens from college.
Fifty-four percent of the Russian Federation's population aged 25 to 64 has an associate's degree or higher, data from the Organisation for Economic and Co-operative Development reveals. Canada trails Russia in second place with 48.3 percent.

with associate degree or higher in 2008, population survey 2010 census

"Key schools," shut down during the Cultural Revolution, reappeared in the late 1970s and, in the early 1980s, became an integral part of the effort to revive the lapsed education system. Because educational resources were scarce, selected ("key") institutions - usually those with records of past educational accomplishment - were given priority in the assignment of teachers, equipment, and funds. They also were allowed to recruit the best students for special training to compete for admission to top schools at the next level. Key schools constituted only a small percentage of all regular senior middle schools and funneled the best students into the best secondary schools, largely on the basis of entrance scores. In 1980 the greatest resources were allocated to the key schools that would produce the greatest number of college entrants.
In early 1987 efforts had begun to develop the key school from a preparatory school into a vehicle for diffusing improved curricula, materials, and teaching practices to local schools. Moreover, the appropriateness of a key school's role in the nine-year basic education plan was questioned by some officials because key schools favored urban areas and the children of more affluent and better educated parents. In 1985 entrance examinations and the key-school system had already been abolished in Changchun, Shenyang, Shenzhen,Xiamen, and other cities, and education departments in Shanghai and Tianjin were moving to establish a student recommendation system and eliminate key schools. In 1986 the Shanghai Educational Bureau abolished the key junior-middle-school system to ensure "an overall level of education." Despite the effort to abolish the "Key Schools" system, the practice still exists today under other names, and education inequality is still being widely criticized by some government officials and scholars.


http://www.chinaeducenter.com/en/cedu.php
China education is the largest education system in the world. On June 2013, there were 9.12 million students taking the National Higher Education Entrance Examination (Gao Kao) in China. Investment in education accounts for about 4% of total GDP in China. In 1986, the Chinese government passed a compulsory education law, making nine years of education mandatory for all Chinese children. Today, the Ministry of Education estimates that 99.7 percent of the population area of the country has achieved universal nine-year basic education.


The Case for Saturday School - WSJ.com


Mar 20, 2010 - Kids in China already attend school 41 days a year more than students in the U.S.
Saturday classes are the norm in Korea and other Asian countries—and Japanese authorities are having second thoughts about their 1998 decision to cease Saturday-morning instruction. This additional time spent learning is one big reason that youngsters from many Asian nations routinely out-score their American counterparts on international tests of science and math.


How Many Days a Week Do the Chinese Go to School?


In some areas Chinese students go to school six days a week. Their day is also much longer with a two hour break for lunch, and dinner. They go back to school.

http://www.infoplease.com/world/statistics/school-years.html
Because China is in the northern hemisphere, its summer months are in line with Asia, Europe, and North America. The school year in China typically runs from the beginning of September to mid-July. Summer vacation is generally spent in summer classes or studying for entrance exams. The average school day runs from 7:30 a.m. to 5 p.m., with a two-hour lunch break. Formal education in China lasts for nine years. China provides all students with uniforms, but does not require they be. There are about 21 students in each classroom. All Chinese students study from textbooks that emphasize China’s unity, past and present accomplishments, and its future. Students in China also have great access to computer technology, with a computer to student ratio of 1:2. Chinese language and math skills are tested at the end of each year. Math is typically taught by drill, which means students are repeatedly taught the basics of math until they are able to demonstrate comprehension. Education in China since the turn of the 21st century has been undergoing reform, with curriculum being redesigned to emphasize group activities and other methods believed to foster creativity and innovation.

http://chineseculture.about.com/od/thechineselanguage/a/Introduction-To-Education-In-China.htm
After middle school, parents must pay for public high school though the majority of families in cities can afford the modest fees. In rural parts of China, many students stop their education at age 15.
Chinese students attend classes five or six days a week from early morning (about 7am) to early evening (4pm or later). On Saturdays, many schools hold required morning classes in science and math. Many students also attend 補習班 (buxiban), or cram school, in the evening and on weekends. Much like tutoring in the West, these schools offer additional Chinese, English, science and math classes and one-on-one tutoring.


http://www.china-mike.com/facts-about-china/facts-chinese-education/
Under China’s “Law on Nine-Year Compulsory Education,” primary school is tuition-free. However, students must pay a small tuition fee after the compulsory nine years of education during middle and high school.
[ Wikipedia “Education in the People's Republic of China” ]
More than 60% of high school graduates in China now attend a university, up from 20% in the 1980s.
[ The New York Times “The China Boom” Nov. 5, 2010 ]
Today, China has over 2,000 universities and colleges, with over 2 million total students enrolled in higher education.
[Wikipedia “Higher education in China” ]